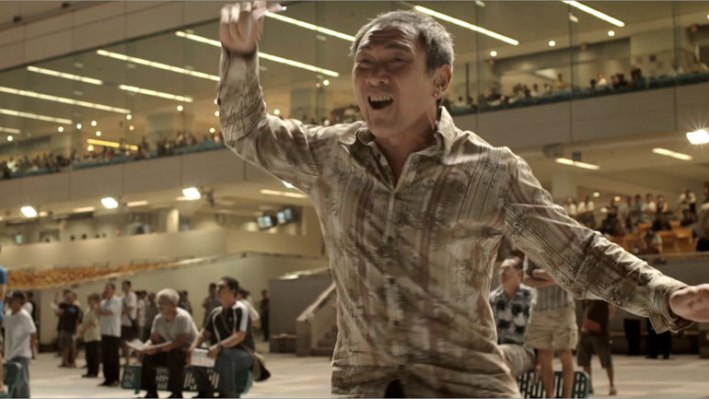 Hey, kids. So this short film I co-write while living in Singapore is playing at CAAMFest in San Francisco on both March 15th at 9:15pm and March 21 at 6:30pm as part of their One on One Shorts Presentation. For those of you not in the know, CAAM stands for Center for Asian American Media, which makes perfect sense because I’m very not Asian. But we shot it in Asia (on location in Singapore), and I’m American, so there you go. The film was directed by Maxim Dashkin (who’s Russian, not Asian), produced by Anna Dziembowska (who’s German, also not Asian), and co-written by Dean Lundquist (who’s also American, and lives in Asia). It stars Kay Tong Lim, who is probably the most accomplished Singaporean actor of all time in terms of international exposure (he was in Brokedown Palace!) I’m going to be there on the 15th to see the screening and represent the film (I think), and I’m excited because I have not seen any of the recent cuts.


Anyway, if you’re in the Bay Area, please come support me and the film and say “Hello.” There’s more information about the screening at CAAM’s website (and you’ll find the exact same image pictured above, which I stole from the same website, and in case you couldn’t tell, is obviously a screengrab from the film).

On an unrelated note, I may be going back up at the Comedy Store next Wednesday, March 13th. Come watch me be funny.

Another (Kind of Uneventful) Update

Hello again. Please refrain from breaking into song a la Neil Diamond. No one gets that? Okay, let’s move on to the post.

Hi. This is an update. I just did a show at the Comedy Store. It went well. Really well. Unfortunately, I don’t have video recording, but I do have audio. The copy I’ve heard so far is of pretty horrible sound quality, so I don’t think I’m going to share that, but if I get the other one and it’s good, maybe I’ll post it. You’re kind of not missing that much, a lot of it is material that you can already see here on my website or over at that YouTube site, and the stuff you haven’t heard, to be honest, I kind of want to save because I’m almost certainly going to use it again.

And there will be an again! I’m going back up at the Comedy Store on Wednesday, January 2nd. A whole nother (but not necessarily all-new) five-eight minutes. So be excited and be there. Tickets are, as usual, $10 and there’s a two drink minimum. Don’t worry, I don’t see any of that money, so if you don’t like my set, you won’t necessarily directly be supporting me, but there will probably be another comic there that you do like! Last time there were around 10 comics and they were all really funny (I was the funniest, of course). There was even a surprise appearance/set at the end of the night by the mega famous Russell Peters, so who knows who could show up next time, right? Also, I can technically say I’ve opened for Russell Peters now, can’t I? I mean, is that kosher? It’s not necessarily lying, because I did go on the same stage before him on the same night in front of the same crowd. So yeah. Fuck you, I’m saying it.

Anyway, come see me on the 2nd. I’ll be funnier there than I’m being right now, I promise.

Also, check this shit out: I’m in a band! Yup, I’m the drummer for a local LA band called Orphanette. We’re kind of a retro-alternative, not-so-indy-but-a-little-indy kind of band. And guess what. HOLY SHIT! We’re playing a show. Yup, you can find all of the relevant information HERE. It’s going to be fun. We’ve been practicing our asses off upwards of 1-2 times a week.

Hmmm, what else? I guess nothing. Isn’t that enough? Two different performances of different kinds of entertainment? What the fuck do you want from me? A ballet recital too? All right, fine, but you’re going to have to wait for the next update.