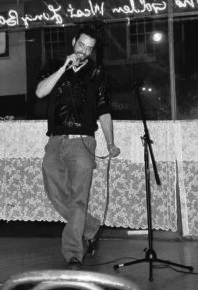 Welcome to my boring website. In case you’re wondering who I am, which is probably most of you, I am an aspiring comedian; screen, television, and playwright; and experienced  director, videographer, editor and graphic designer. I’m also the drummer for the band Orphanette. I’m currently living in Los Angeles and just got my MFA in Dramatic Writing at NYU Tisch School of the Arts Asia. I’m originally from Baltimore, Maryland and have worked for Urbanite Magazine, Comcast Spotlight and StrataTek Studios.

I have two television pilots in independent development, a feature-film in independent development, and a short film in the final stages of post-production, as well as the dozens of short pieces (documentary, comedy, sci-fi, and music videos) I’ve already produced. You can find most of my work linked to on my website, and writing samples, including the four feature-length screenplays and one full-length play I’ve written, are available upon request.

I won the Creative Alliance Bake-Off Jury Award and Audience Award for the short film I created with Dennis Parker, Ricky Johnson and Bobby Marcellino, The Dubious Phone of Bananas, and the Towson Media Arts Festival Second Place award for the same film. Impressive, I know.

Okay, I think I’m finished aggrandizing all of my accomplishments and exaggerating my talents, but seriously, I want to work in film and television, especially in the realm of comedy. So if you see one of my stupid videos online, please do me the minor favor of circulating among the people you call “Friends” on Facebook and “like” the damn thing. I need the exposure.

Feel free to contact me at CERebbert@gmail.com if you want to a) read one of my scripts or b) tell me that I’m a talentless, lanky piece of shit; and for the love of god, follow me on Twitter.